Speaking at his old stomping grounds, Rayshawn L. Wilson, "LionHeart" spoke at Columbus State Community College during the first annual College Retreat hosted by Ohio Reach on Saturday, August 26, 2016. Clark State, Cincinnati State, Columbus State, Ohio University, Cuyahoga Community College and Central State University students were all in attendance. Ohio Reach improves post-secondary outcomes for foster care youth and alumni through leadership, empowerment, advocacy, research and networking (L.E.A.R.N.). Ohio Reach awarded 60,000 grants to several of the colleges (for three years; 20k per year) in attendance; the focus of the grant requires that each college implement mentoring as a form of support for each Scholar enrolled in all of the programs.

LionHeart completed a year of college at Columbus State and during his time there, he earned an "A" in a Criminology course, which inspired his future degrees. Prior to his academic studies at Columbus State, he completed his GED in prison; he was convicted of a crime he never committed. He transferred to Otterbein College where he thrived and lettered all four years on the football team. Beyond earning three advanced degrees/certificates, he self-published his own book.

As a former foster youth himself, LionHeart educated state-wide Scholars about "Four Chambers of the Heart;" he read excerpts from his book, LionHeart; Coming from Where I am From and discussed his own experiences. LionHeart challenged the Scholars to forgive themselves, as well as, forgive others - in order to move forward in their lives. He shared his experiences being bounced around ten foster homes/group homes during his youth while navigating a world without his biological parents. During his presentation, he read a powerful passage that was written as a letter to his mother.

One of LionHeart's signature phrases, "Slow feet don't eat" resonated with the crowd and earned him collective finger-snapping. He shared his efforts in becoming not just a self-published author, but an award-winning author. He spoke of his journey selling 2,500 books out of his car and at similar speaking engagements. He said, "Out there in the real world, no one is gonna care if you were a foster youth or lived in ten foster homes - you just have to get out there and get hired based on how hard you work." Lionheart closed out his message by motivating the room about the Four Chambers of the heart; he reinforced how important it is that former foster youth make the conscientious decision to move beyond barriers to accomplish the goal of graduating from college. 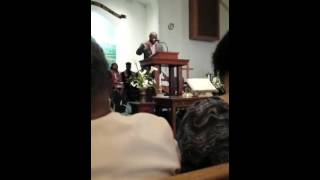